A few weeks ago, I wrote about my documentary "A2" being submitted as evidence in a lawsuit that a group of Fukushima children have brought against the local government demanding their right to study in a safe environment.

An article about the case and the impending decision written by the Associated Press's Yuri Kageyama was published yesterday and can be found HERE. 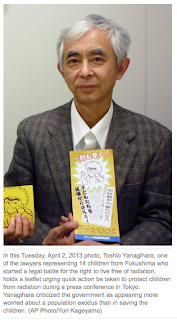 Since my film was used as evidence in the case, Yuri asked for my comments for her article.  Unfortunately, my quotes were eventually cut from the article before it was published, but Yuri graciously both Tweeted and posted my comments on Facebook (below):

"A2", by Ian Thomas Ash, was submitted as evidence in this lawsuit. Some great comments he gave me were edited out and so here goes on Facebook:

_  "If this same disaster happened in the West, with the same level of corporate mismanagement and government cover-up, I think there would be riots in the streets."

_  "The government response has been too little too late. It has been proved time and time again that the government has withheld vital information, and yet they still ask that the people believe what they are saying. How can people who have been effectively lied to be expected to believe those who have lied to them?"

_  "So many government officials are only looking out for their own jobs. Very few officials have had the courage to stand up and say that what is happening is wrong."

_   "No one can really say for certain if the children living in Fukushima are in danger or not."

_  "I think that by just bringing this lawsuit, the students in Koriyama have already won. Of course it would be great if the judges rule in favour of the students. But even if they don't, the students have been successful in raising awareness and starting a debate about the conditions in which the children in Fukushima are living. Either way, the students have won."

THANK YOU, IAN, FOR THE FILM, YOUR COMMENTS AND YOUR CARING ABOUT THE CHILDREN OF MY NATION.

(Yuri Kageyama can be found on Twitter at: www.twitter.com/yurikageyama)
Posted by Ian Thomas Ash at 10:17 pm