The judgement on the Fukushima Collective Evacuation Trial was handed down today.

The case involved school children in Fukushima who were demanding their right to an education in an environment free from radiation.

My documentary 'A2' was submitted as evidence in the case, and I wrote about that HERE. AP reporter Yuri Kageyama﻿ wrote a very informative article about the case as the parties involved were awaiting the ruling (article is HERE).

I attended an emergency press conference this evening held by Yanagihara Toshio, the lawyer for the school children. 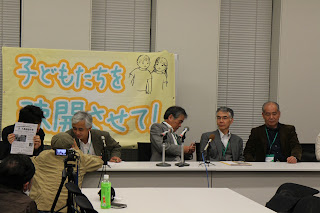 In a difficult to understand and seemingly contradictory statement, the court ruled AGAINST the children, even while ADMITTING that the children were being exposed to levels of radiation above the government total annual threshold of 1 millisievert.

In layman's terms: the kids may be in danger, but the local government and schools can't be held accountable.

Mr. Yanagihara, the childen's lawyer, is not giving up. 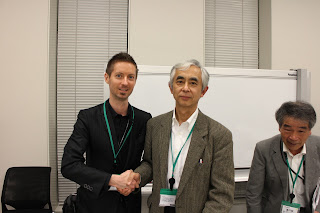 An article has just been published about the court ruling by AP reporter Yuri Kageyama (HERE).
Posted by Ian Thomas Ash at 12:52 am