The Global Peace Film Festival (website) begins in just a few days (Sept 18-23), and I am busy preparing for the trip to Orlando.  More good news is coming in daily, among which was an invitation to speak with students enrolled in the "Media, Peace and Justice" course at Rollins College.  It is such an honour to be a part of the Global Peace Film Festival and the greater outreach programs it has established in the wider community.


In the beginning of October, the European premier of "In the Grey Zone" will take place in Camera Japan (website) in Rotterdam, Holland (October 4-7).  Camera Japan has just announced its full line-up of films (here), and it is truly humbling to be included in such a beautifully curated lineup. 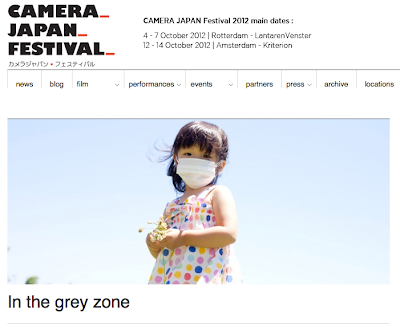 There was a nice mention of "In the Grey Zone" in the September 13th edition of the Orlando Sentinel (here).
Posted by Ian Thomas Ash at 2:05 pm

I will be attending you film in Orlando. Just wanted to say I can't wait to see it and I am so excited to attend this year's festival. Your film looks like it is going to be an incredible work of art. Thanks for sharing!

Thank you so much for your words of support! Please introduce yourself at the screening at Peace Film Festival. I look forward to meeting you.