The fire of peace burns bright

Each day at Global Peace Film Festival (website) seems filled with more activities and more fun than the day before.  Today started with another live interview on radio station WPRK (website) with DJ Lazeros and fellow filmmakers Purna Singh Baraily from the Human Rights Film Network of Nepal (website) and director Megan Smith-Harris from Canada (website).

Lazeros commented again, as he had after previous interviews this week, about how the dynamic was so different when interviewing a studio full of directors.  We talked about our films in the festival, making films in general and even had an chance to ask each other questions and have a few laughs.

Next was a luncheon hosted by the good people at the Metro Orlando Film and Entertainment Commission (website) at a beautiful cinema and cafe.


In the afternoon, I was invited to speak on the panel of"Making Films That Make a Difference" (website).  The audience, made up of members of the community, university students and fellow filmmakers, asked us things like how we funded films that are socially important but in many cases are not commercially viable.  They were also interested in how the stories were developed and if we thought a lot about who the 'audience' for the film would be before we embarked on making the film. 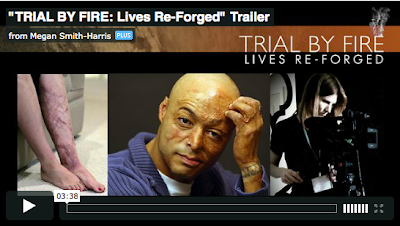 In the evening, I attended the screening of "Trial By Fire: Lives Re-forged", directed by Megan Smith-Harris (website).  The film tells the story of people who have been badly burned: but rather than be resigned to life as a burn victim, they overcome their injuries to become burn survivors.

Perhaps the biggest challenge for this film is getting people to actually come to the cinema.  It's not an easy subject and certainly not a film that one would 'enjoy' while eating popcorn.  But once you get into the cinema, the reward is great.

This is a beautiful story that really opened my eyes to a world I never even knew existed.  Perhaps the biggest surprise for me was hearing that not one of these people who had been so badly disfigured would go back and change it.  Not one.  They all felt that their scars were a part of who they are; the scars defined them, were a part of them and they would not change them, even if they could.
Posted by Ian Thomas Ash at 11:21 pm