I arrived in Orlando tonight, and we touched down during a beautiful sunset. 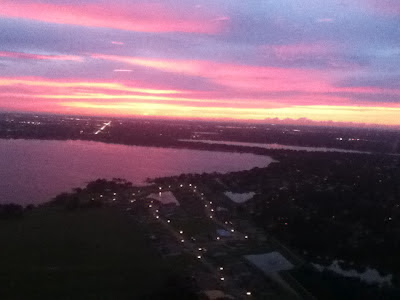 After being picked up by festival volunteer @mikkimouth I hit the ground running and we rushed from the airport directly to Peace Film Festival's opening film, "The Zen of Bennett".

"The Zen of Bennett" is a beautiful documentary which weaves interviews with Tony Bennett along with studio recordings of Tony singing with some of the world's most talented singers.

One of the most poignant scenes in the film is when Tony records with Amy Winehouse, who is now deceased.  Prior to the recording, he very candidly talks about his intention to give her advice to get off drugs.  And their recording together is electric.

At 85, Tony is in top form. And perhaps because the film was produced by his son, and he is mostly surrounded by his children (his manager, his photographer, and even his opening act singer are all his kids), he seems relaxed and generally off-guard, offering up the kind of intimate details that perhaps he wouldn't have shared had the film been made by "strangers".

The film screens again at Peace Film Festival on Friday (screening information here) and will be theatrically released this autumn (film's website is here).