Stick 'em up! Your money or your... freedom

It was a three-day weekend as yesterday was Respect for the Aged Day (INFO), and as such traffic was quite heavy as people headed out of the concrete jungle that is Tokyo to enjoy some time in the country-side.  At 8:40 am on Sunday morning as I was headed to the station to catch a bus to the trainstation-less town of Iijima in Nagano Prefecture, Mr. Obata, the screening organizer called and asked if I could possibly take the 9am bus rather than the one I planned to take at 10am; checking the road reports, Mr. Obata had discovered there was a 50km traffic jam heading out of Tokyo and the normally 3-hour ride was now expected to take over six(!).

With less than 20 minutes to get to the station before the 9am bus left, there was no way I was going to make it, and even if I did, there was still no guarantee that I would arrive in time for the planned post-screening discussion in the afternoon.  Understandably sounding stressed, Mr. Obata said, "Please just head for the station, and I'll think of something."

To make a rather long (and now funny, but rather stressful at the time) story short, Mr. Obata figured out how to get me to the screening using two trains and a volunteer driving an hour and a half to the train station nearest to Iijima.  Thanks to Mr. Obata's quick thinking, I made it to the screening venue safely and even had a few minutes to spare! 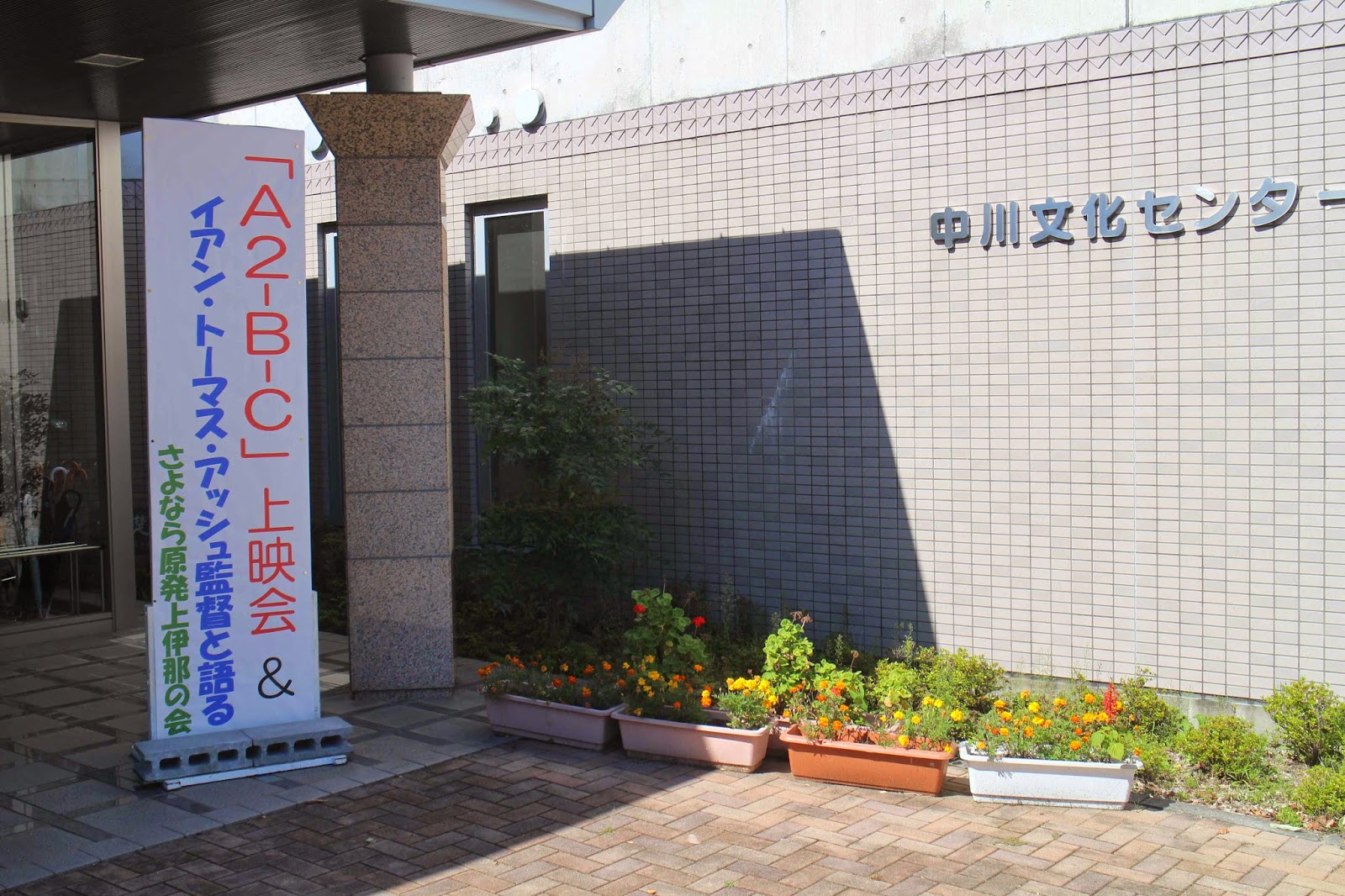 The post-screening talk and Q&A was led by Mr. Obata.  Group member Ms. Morinaga Atsuko, an evacuee from Fukushima, also took part and shared her first-hand experiences.  Over 200 people were in attendance, but the audience was split between two different halls.  The main hall was reserved for young people above a certain age and adults.  The film was then simultaneously projected into a smaller room at the same venue.  This room was for families with little children and babies, and day care was also provided by volunteers.  The organizers of the event wanted to ensure that young families who desired to see the film could do so without feeling that their children might disturb the screening.  I thought this was a wonderful idea, and one that I hope more groups will embrace. 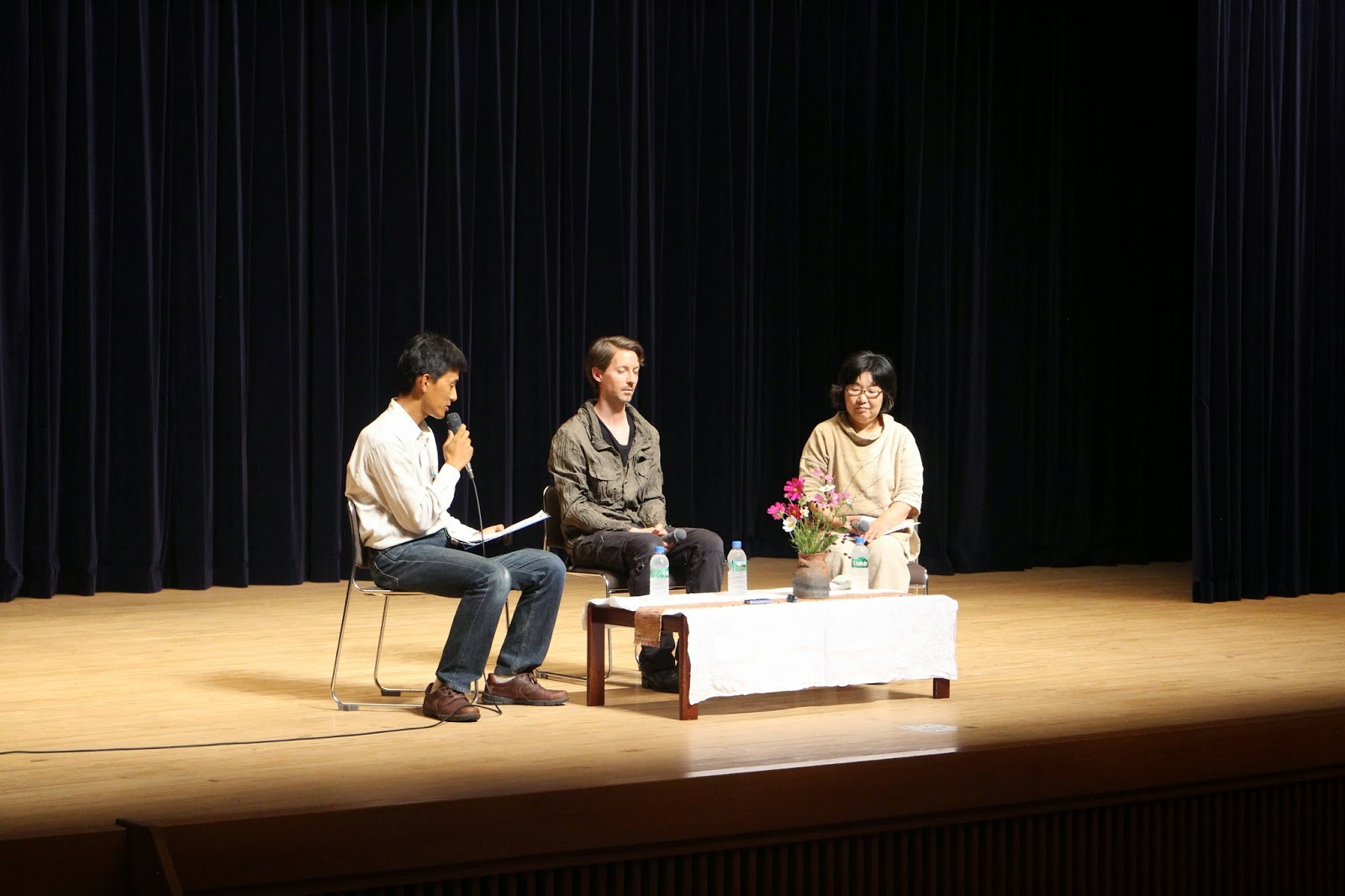 There were so many interesting questions, but one that really stands out had been in response to something I had said when answering another question.  When asked what it is that people in Fukushima need the most, I had responded "Information they can trust".

A man then stood up and asked, "How do we know what information we can trust?"  Great question! As I have said many times before (like in THIS blog entry), I replied "Everything comes down to money."

I then gave the example that newspapers sell ads to survive, and they are therefore beholden to the companies that buy those ads (companies like TEPCO, for example).  The same is true for television.  Even NHK, the public broadcaster, which is ostensibly operating using the people's tax money for the people, is, in reality, receiving that money from the government.  Do they really have complete autonomy to conduct fair and unbiased reporting?

I continued: when you are looking for information that you can trust, you must first look at where the money that is supporting the research and dissemination of that information is coming from.  This is true for everything, including my documentaries.  That is why I fund my own films and do not work for a large news organization.  This may result in a financial struggle for me, but it also means that I have compete independence to make the films in the way that I feel is right.  Absolutely no one is controlling the content or editing of my work, and I would see accepting large amounts of funding as tantamount to selling one's freedom. 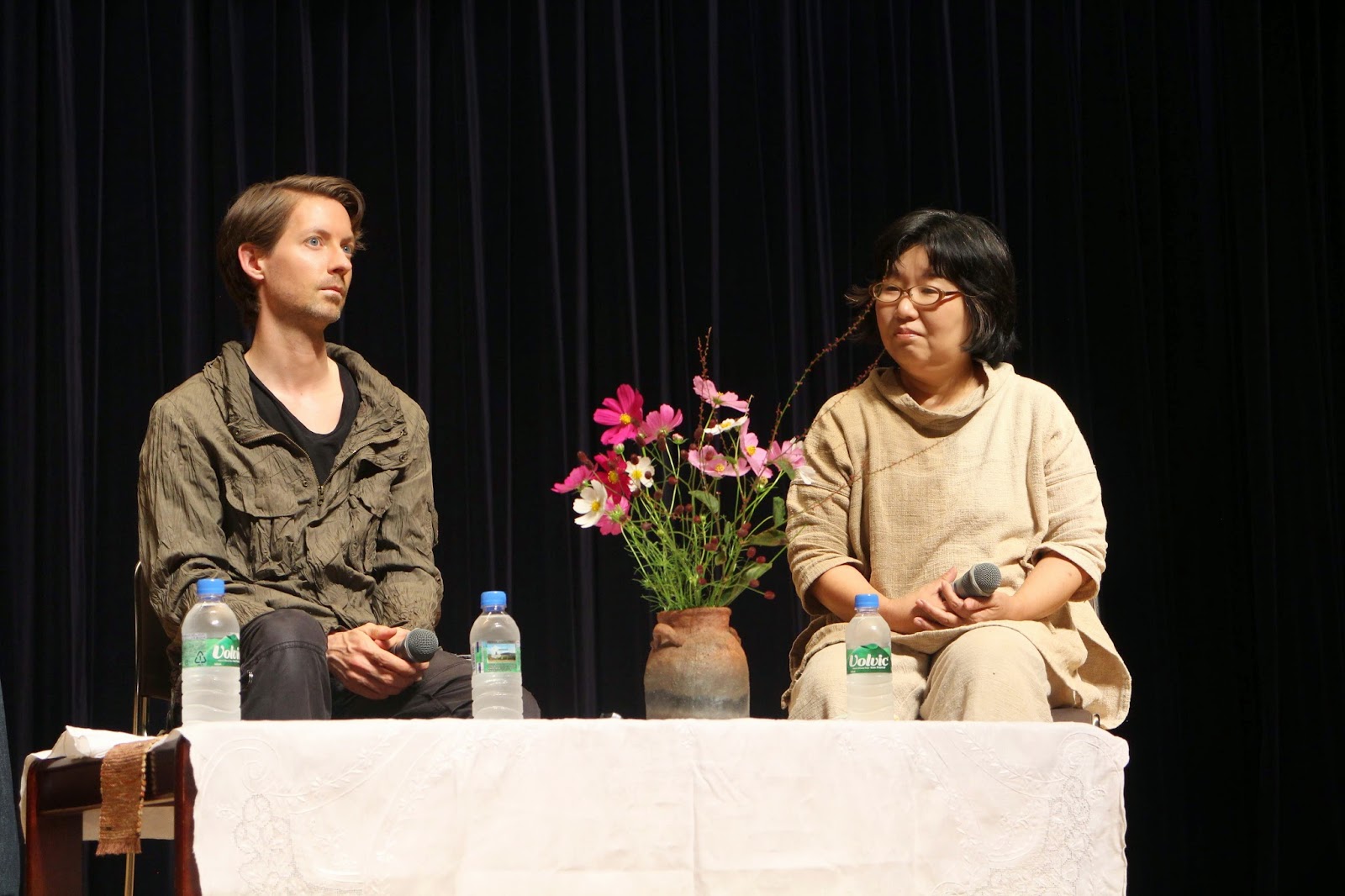 In the car on the way back to the bus stop after the screening, Mr. Obata shared with me that after the nuclear meltdown, he had evacuated his wife and children out of the path of the radioactive fallout.  They had just built a brand new house, but the health of their three small children was all he could think about (photo with Mr. and Mrs. Obata and two of their children BELOW).  Working in forestry, Mr. Obata was fortunate to find a job in Nagano Prefecture, home of the "Japanese Alps", and joined his family a few month later. 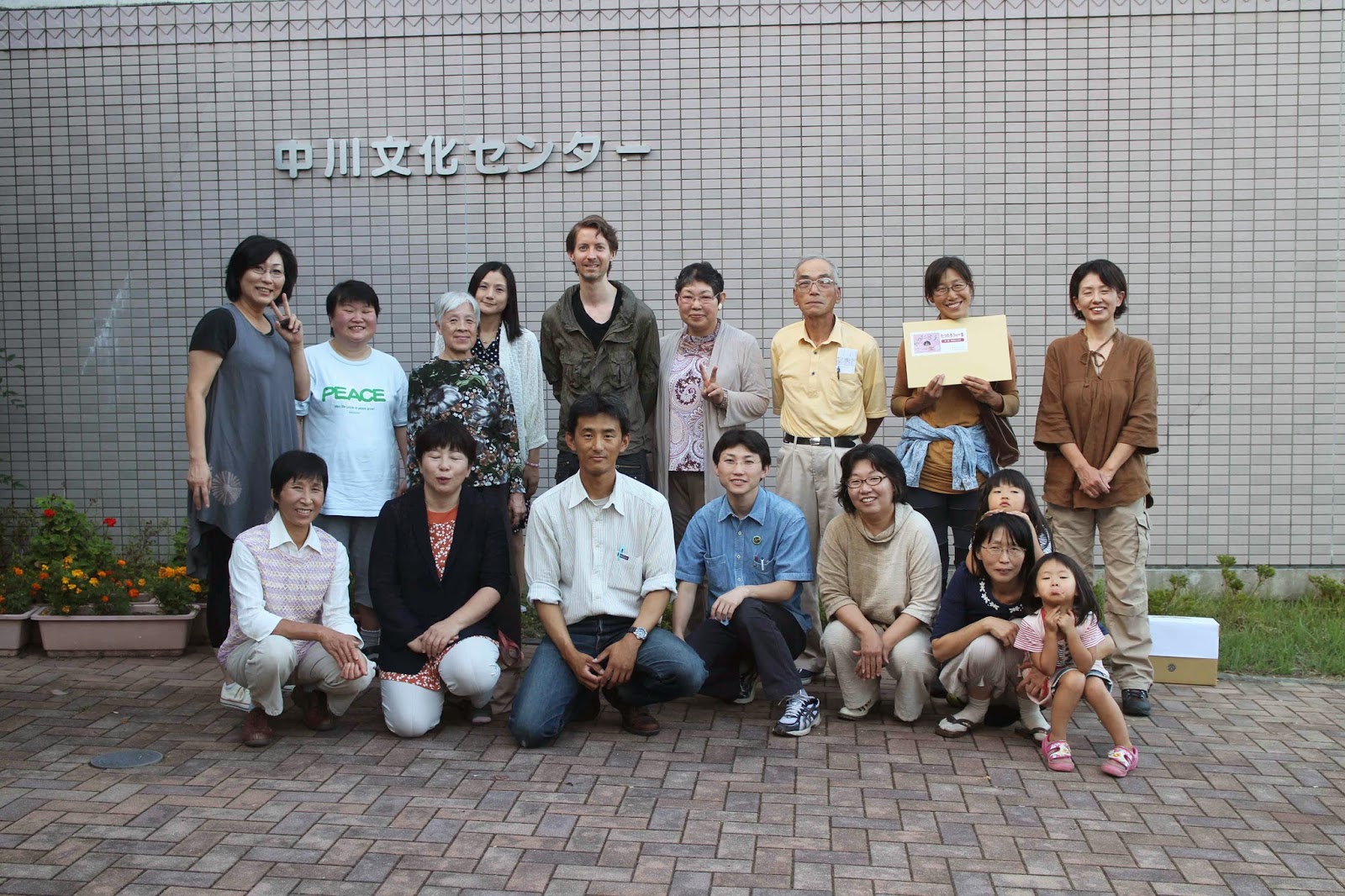 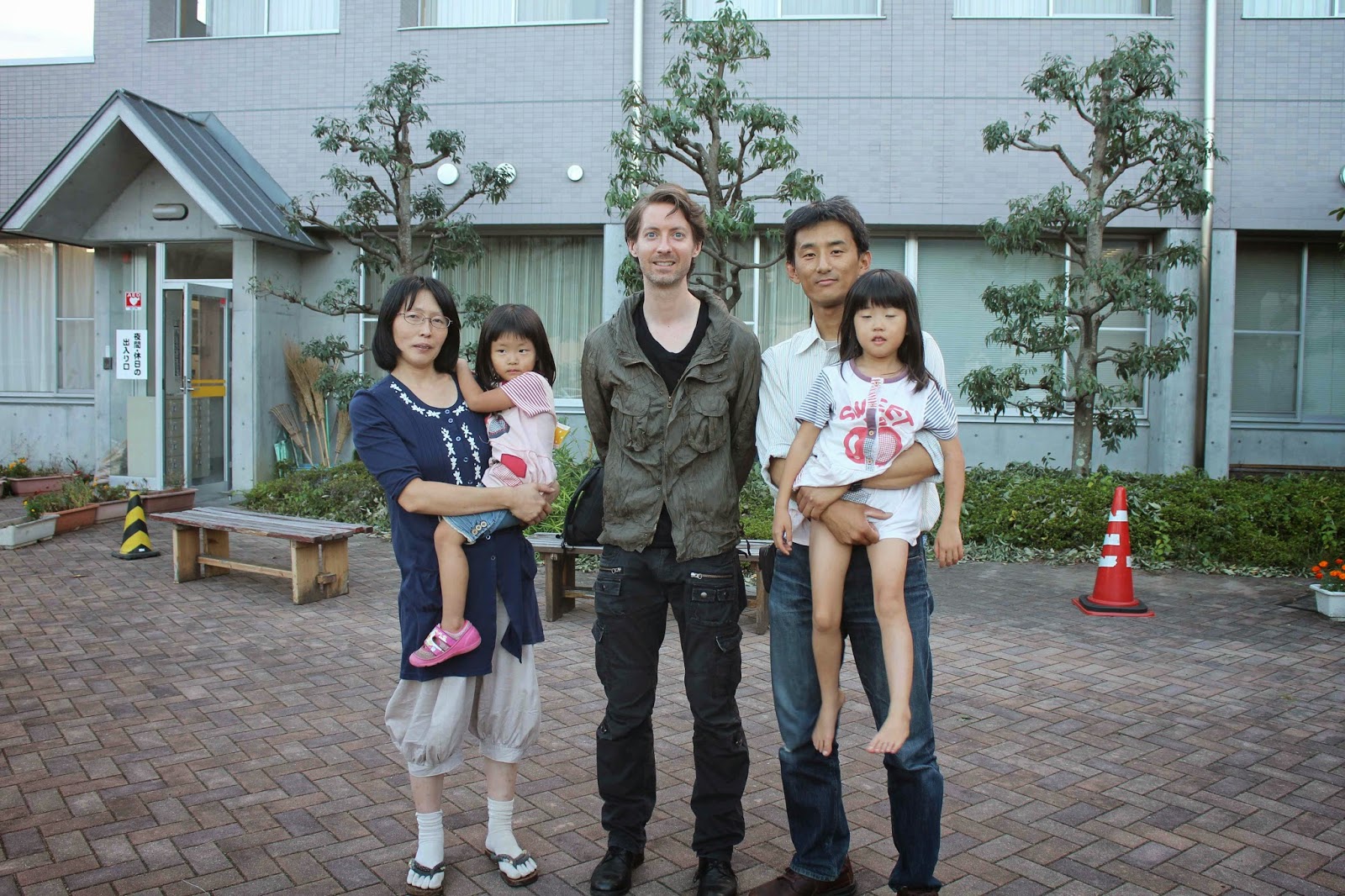 The bus ride back to Tokyo would have been a relatively quick 3-hours, arriving in Shinjuku at 11:00PM, had it not been for the so-called "U-turn".  This is the term that is used to describe the large numbers of people returning to the capital after having left town for a long holiday weekend.  Stuck in a 40km traffic jam for nearly three hours, the bus finally arrived in Tokyo at 2am (!).  In an unfamiliar part of town, with no trains running and not enough money for a cab ride home or a descent hotel, it was the first time in a while where I wasn't sure what I was going to do.

Life is like a documentary; you never know what is going to happen.  And indeed, it does all come down to money.  But given the choice, I choose freedom.
Posted by Ian Thomas Ash at 10:25 am