North American and Dutch Premiers of "Sending Off" announced

I am thrilled to announce the North American premier of “Sending Off” (film website HERE) in the Newburyport Documentary Film Festival in Massachusetts, USA, on Sunday, September 14 (INFO), and the Dutch Premier in Camera Japan in Rotterdam, Holland, on Saturday, September 28 (INFO).

And I am honoured to be able to be in attendance at both. 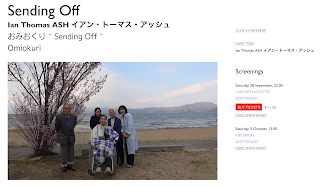 I first had the honour to screen at and attend the Newburyport Documentary Film Festival in 2013 with my film "A2-B-C" (2013) STORY, and I am thrilled to screen there again this year.


Camera Japan (CJ) in Holland is the only festival to have have screened four (and with "Sending Off, now five) of my films (list below, which includes "Boys for Sale" on which I served as Executive Producer).  I attended the festival for the first time in 2017 where I had a wonderful time (STORY).