Ahead of the Japan Premier of my new feature documentary「おみおくり〜Sending Off〜」(WEBSITE) at the National Film Archive of Japan on the opening day of the Pia Film Festival on September 7 (STORY), I have some exciting news: the film (and I!) will be featured on TOMORROW'S (Aug 13) episode of the NHK World Japan program "J-FLICKS"!

It is a huge honour to have my work featured on a television program with the tagline:

Japanese cinema in-depth! The latest info on the best of Japanese cinema, from blockbuster to indie, stars, film festivals, interviews and insights!

This month's episode is called "Focus on Nippon Connection 2019", which is about the film festival in Germany where 「おみおくり〜Sending Off〜」held the World Premier and received the Nippon Docs Award (Audience Award for Best Documentary) (Story HERE).  This is the synopsis of the episode:


Taking place every early summer in Frankfurt is the world's largest festival dedicated to Japanese cinema, Nippon Connection, which was held for the 19th year this June. On this episode of J-FLICKS, we present a film that received a Special Mention by the Nippon Visions Jury at the festival, "BLUE HOUR," directed by Yuko Hakota. We also look at Kensei Takahashi's "Sea," winner of the Nippon Visions Jury Award. And joining us in the studio as a special guest is Mr. Ian Thomas Ash, director of "Sending Off," a documentary that won the festival's Nippon Docs Award.

For exact broadcast times, please see the J-FLICKS website, which displays the air times for the zone in which it is accessed (WEBSITE).


Outside of Japan, the program can be viewed on the NHK World Japan channel, app (this one HERE) and website (watch LIVE HERE); inside Japan, it can be viewed on the website and app. After the August 13 air date, the episode will be available to watch for free On Demand (watch On Demand HERE), and it will also be rebroadcast on September 9. 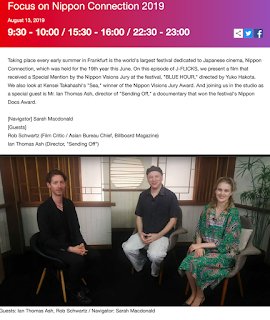 Back on June 21, the day of the studio recording, this is what I posted on social media:

Huge honour to have my documentary work featured during today’s taping of NHK WORLD-JAPAN program dedicated to Japanese film J-Flicks for their special episode “Focus on Nippon Connection - Japanese Film Festival“ with presenter Sarah Macdonald and studio guest Rob Schwartz, who is Asia Bureau Chief for Billboard magazine. While discussing my film “Sending Off”, which is about end-of-life care in Japan, Rob revealed that his father was Morrie Schwartz of “Tuesdays With Morrie” and presented me with a copy of the book. I have chills- my mother had given me a copy before she died but I had never been been able to bring myself to read it. It must be more than a coincidence that Rob had already been booked as a guest when they decided to feature my documentary. I am so grateful. Episode airs August 13 and September 10. 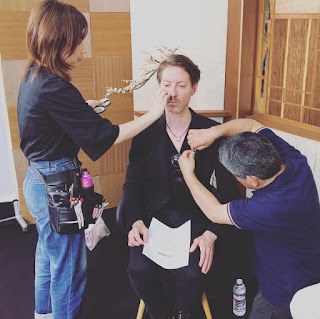 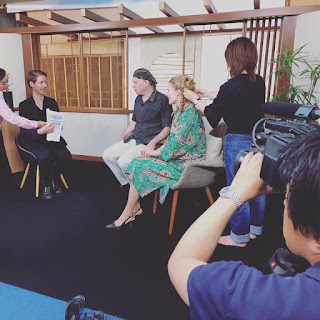 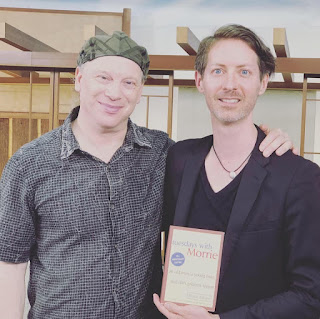