$22 yogurt AND no more merry Christmases?!

National Azabu supermarket (website here) with its wide selection of imported foods has been in the centre of the foreign community in the Hiroo neighbourhood of Tokyo since the 1960's.

National Azabu is so much a part of the foreign community, that when I decided to film the evacuation of the expat population after last year's earthquake and nuclear disaster, the Hiroo neighbourhood, and specifically around National Azabu, is where I went.  That documentary, where I even met and interviewed an ambassador's wife while she ventured out for supplies, can be seen here:


National Azabu's already aging building was damaged further in last year's earthquake, and it was subsequently closed, demolished, re-built and has just held its grand re-opening.  I received the flyer in Friday's paper and one thing in particular caught my eye:  Total Greek Yogurt.  I LOVE Greek yogurt, and it is one of the things that you just can't find here and for which there is no real replacement. 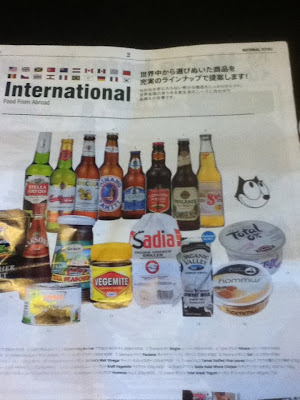 But wait!  A quick look at the fine print reveals that... the yogurt costs ¥1,750 ($22 US dollars).  Surely that must be a misprint, I thought.  So I went to National Azabu today to find out.

First, the building is now a boring, modern pre-fabricated looking thing just plunked down next to the street.  Where before it had character and the complex housed a lovely little flower shop with a tree growing right through the roof that you walked past, now it is just the Tokyo-business-version of a double-wide trailer.  The decorations at the flower shop at Halloween and Christmas had been such a nostalgic joy to walk past and part of the "National Azabu Experience".  Now, an unimaginative flower shop has been incorporated directly into the grocery store itself.

With so many more stores (both physical and online) offering foreign foods and products, the thing that had set National Azabu apart, its ambiance, is gone.  Modern, yes.  Still worth a day trip for the "National Azabu experience"?  No. 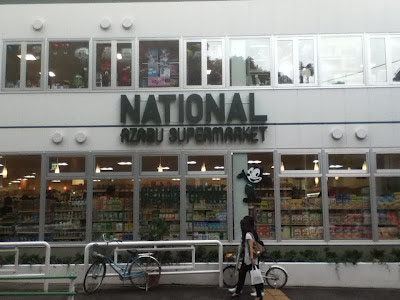 Inside, the aisles seem more narrow than before (is that even possible?), the food selection seems more limited (did they decrease floor space in order to have more parking?  It appears that way.) and the prices seem even higher (and they weren't cheap to begin with).

I ventured over to the dairy aisle to find the Greek yogurt and to give National Azabu a chance to redeem itself by proving that the $22 price was a misprint. 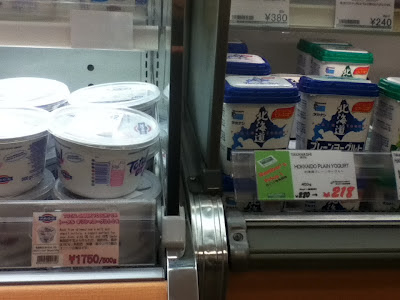 Way to go, National Azabu!  You completely sanitized, pasteurized and modernized one of the institutions of ex-pat life in Tokyo.  You took away what used to be turned into a Christmas village in December, something that made us so warm and fuzzy that we didn't even mind paying exorbitant prices for Christmas treats and decorations.

In its place, you have given us $22 yogurt in a pre-fabricated double-wide trailer.  Genius.

My sister, Amanda, just sent me this photo from her local grocery store in the US.  The yogurt is $3.99!  I know it must cost a lot of money to import perishable goods, so one might expect an imported product to cost 2 or 3 times as much as "back home".  But more than 5 times?! 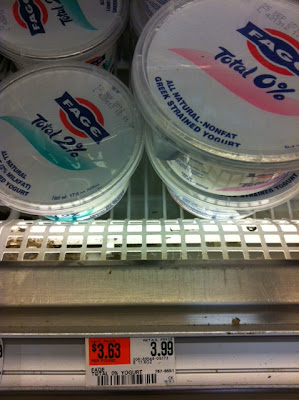 Seriously though, who cares?

You're right, how much yogurt costs doesn't really matter.

But so much of our lives here in Japan is now taken up worrying about serious things like the danger of radiation; so give us a break and let us indulge in a having a little fun complaining about things that don't really matter.