From Bikini to Fukushima

Watching any film with an audience that is so engaged, even physically (by nodding heads) and verbally (by calling out to the characters in the film) is an experience that for me defines what it means to go to the cinema.  For a filmmaker, this is an honour beyond any that one can receive.

The post-screening Q and A for 'A2-B-C' last night went brilliantly, and this is a direct reflection on the Guam International Film Festival (GIFF) itself (WEBSITE).  The Muna brothers, co-founders of GIFF, have brought together the atmosphere, programmed the films, and attracted the excited audience that some more-seasoned festivals can sometimes miss.  And Kel and Don do all of this while remaining so humble that unless you knew who they are, well, then you wouldn't know who they are. 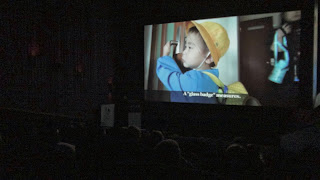 After the screening, audience members offered messages of support to the people of Fukushima.  GIFF co-founder and filmmaker Don Muna, grabbed my camera and started to shoot, thus freeing me from filming and allowing me to interact with the people giving the messages in a way I have not been able to do before.  What a gift! 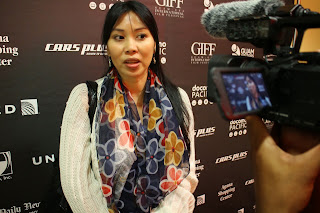 One of the most poignant message was from fellow filmmaker Jack Niedenthal, a 30-year resident of the Marshall Islands and his wife, a native of Bikini.  They spoke of the similarities in the issues affecting the people of Bikini, with its 70-year history of radioactive contamination from nuclear testing, and the people of Fukushima.  Fukushima's struggle, Jack pointed out, has only just begun.
ack Niedentha
Jack Niedenthal
Jack Niedenthal 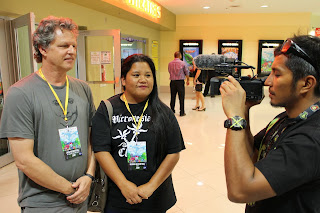 Jack Niedenthal's film, Zori, is screening today, the last day of GIFF (INFO).
Posted by Ian Thomas Ash at 9:25 am