As the acceptances for 'A2-B-C' (WEBSITE) from festivals keep coming, I become ever more humbled.  That so many festivals will be bringing the voices of the children and mothers of Fukushima to people all over the world is more than I could ever have hoped for.

It is now with great honour and gratitude that I can announce the UK premier of 'A2-B-C' in Europe's leading independent film festival, Raindance. 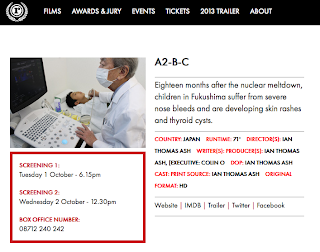