I flew into Kharkov, Ukraine, last night after spending the day outside Kiev.  STEPS Rights Film Festival (WEBSITE) president and film director Igor Parfenov, accompanied by translator and festival staff member Alina, met the visiting filmmakers this morning at our hotel in his tank of a car for what would only be described to us as an “excursion” before the film screenings scheduled in the afternoon.

This excursion began with the compulsory sites that one sees in any city in Europe: the monuments and public squares dedicated to important authors and historical-- often war-- figures as well as noted buildings.  One such building (BELOW) is a modern structure that has stood as the tallest building in Kharkov, yet it is not only this that makes it so unique: the points and angles of the structure are patterned after a music score that when played, sounds out the most popular worker’s party anthem (!).

Igor then led us through a large, beautiful park and explained that we were heading for the zoo.  I must admit that I have a problem with zoos, especially small ones that tend to be under-funded and often keep the animals in tiny, unclean enclosures.

Alina told us the history of the zoo, which was established in the late 1800’s.  As we entered the zoo gates, Igor quietly added “I don’t like zoos.”

He explained that although he doesn’t approve of zoos and how the animals are often kept, they are a necessary evil.  Igor told us that many of the animals here, for example, have been rescued from circuses or private owners that shouldn’t have been keeping them in the first place.  Without someone to care for them, the animals would have been destroyed.

As he talked, Igor was holding a large string of smooth stones that he moved through his fingers one-by-one, and I wondered if it was a massive rosary.  Perhaps he had noticed me looking at them as he suddenly remarked to our group “these are not religious”, although he never did explain what they were.

Igor stopped in front of a grand bull.  A smile on his face, Igor proudly introduced us to one of his film stars.  This bull was featured in Igor’s film "A Farewell to the Bullfight" (WEBSITE), which is based on the Jack London novel "The Madness of John Harned".  Igor’s films (FILMOGRAPHY) combine elements of fiction and documentary and always address some issue of rights, whether animal or human, and often both at the same time.

As we continued through the zoo, seeing larger and larger animals caged, the heavy beads in Igor’s hand moved faster and faster through his thick fingers.

Igor ushered us into the monkey house and then fell silent.

Coming up behind us, he quietly whispered to Alina and me, “Come with me. But just the two of you.”

Igor led us through a gate marked “closed” to a back stairwell that went up to the second floor of the ancient monkey house.  Beyond a cluttered office was a room that was taken up almost entirely by a large cage.  We followed Igor in.

Signaling for us to stay back, Igor approached the bars.  “This is Nika, " he said, as Alina and I stood still and witnessed two old friends greeting each other.

From what little Igor said, I gathered that Nika was being kept separate from the others due to some kind of social integration issue.  I wondered to myself how long it would take being confined to a cage such as this for a human to "go crazy".  I don't suppose it would take very long.

We left in silence and joined the rest of the group downstairs.  I couldn’t get out of my head the mountain lions in tight spaces pacing in tight circles, elephants greeting each other through bars, and caged-up monkeys literally bouncing off the walls. 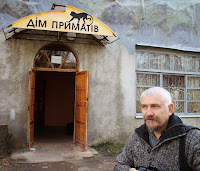