Being able to share the story of the families of Fukushima with film festival audiences all over the world has been an immense honour.  But an even greater honour has been to be invited to speak at universities, colleges and schools and having the opportunity to share what is happening in Fukushima with the younger generation, the leaders of tomorrow.

After arriving in Berlin last night, I went directly from the airport to the Free University of Berlin, where Raindance Berlin had arranged for an educational screening of 'A2-B-C' in the Department of Japanese Studies (event info HERE).

It was a wonderful turnout, and in addition to students from the university, there were also members of the public and the Japanese expat community.  During the post-screening discussion, questions ranged from why more people were not able to evacuate to where families went to for information when they didn't believe the official line.  When the discussion turned to what the thyroid cysts and nodules mean and to the recently discovered cases of thyroid cancer in Fukushima, I was extremely honoured to be able to introduce IPPNW board member, pediatrician and friend Dr. Alex Rosen (author of THIS article about Fukushima and many others; IPPNW International WEBSITE).

Dr. Rosen's calm, informed and easy-to-understand explanation about the medical issues that are discussed in the film helped to contextualize the issues the mothers raise, and I believe his contribution made the discussion one of the most valuable 'A2-B-C' post-screening discussions that have been held.

The screening of 'A2-B-C' in the 1st Raindance Berlin is tonight! (INFO)


On Wednesday, the day before I left Tokyo for Berlin, I was invited to give two talks, one at the Tama Art University in Tokyo (WEBSITE) and the other at the American School in Japan (WEBSITE).

After the screening of 'A2-B-C' for the students at Tama Art University, there was a post-screening discussion, led by film critic and university professor Ken Okubo (PHOTO below), to whom I extremely grateful for much support and encouragement since the jury he served on at the World Premier of 'A2-B-C' awarded the film in June (INFO). 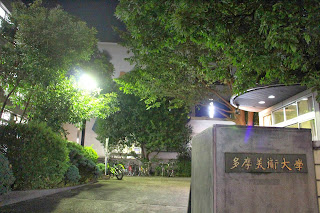 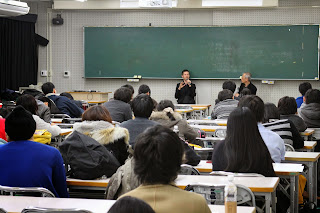 The visit to the American School in Japan, coordinated by ASIJ tutor and Fukushima volunteer Elicia Cousins, began by visiting the class of Ms. Kathleen Krauth, where the students, all seniors, have been learning about disasters in modern Japanese history.  On Saturday of this week, their study will culminate in an experience trip to Tohoku, the area so devastated by the March 11, 2011 disaster. 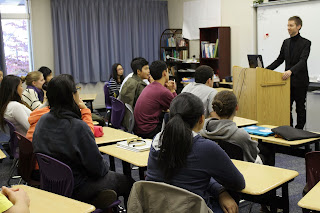 Some of the students at ASIJ are from abroad, some are Japanese who have returned after having lived abroad, and some have parents from different countries; but all of the students attending ASIJ have some kind of international experience.

While sharing clips of my work and talking about my experiences making films and living abroad, the students asked questions and guided the conversation to areas in which they were interested and were relevant to what they had been studying.  Their questions were fascinating, challenging, and probing.

The students were engaged and engaging, both questioning and in possession of answers, and if there is one single group of young people that represents our hope for the future, they are there in Ms. Krauth’s class. 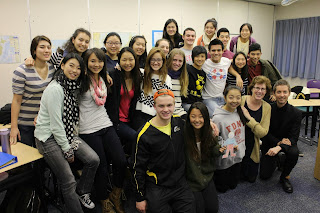 Later in the afternoon, students and members of the greater ASIJ community gathered in the newly refurbished state-of-the-art theatre for a screening of ‘A2-B-C'. 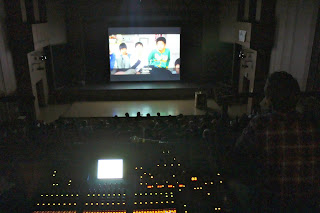 Several mothers who had evacuated to Tokyo from Fukushima were in the audience, and during the post-screening discussion, they honoured us by sharing their impressions of the film and about their lives post-Fukushima. 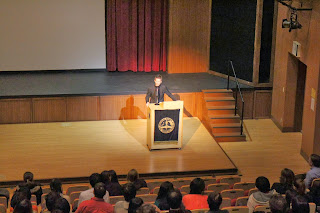 A man about my age stood up to speak, and I stepped down from the podium where I had been standing and went to him with the microphone when I couldn’t hear what he had began to say.   “I work inside Fukushima Number One,” he said in English after taking the microphone.  He went on to tell us that his home had been just 3.5 kilometeres away from the nuclear power plant in Fukushima.  Although he had evacuated his young family to Tokyo, he returns to the dangerous conditions at the damaged nuclear power plant each week to work in the clean-up effort.  “What else can we do to support our families?” he asked.  “The only men left working inside the plant haven’t finished school.  Anyone with a degree quit long ago.”

I was embarrassed.  We owe our lives to this man and to the others like him, and until moments earlier I had been standing on a stage before him speaking about the relatively little I know about the situation in Fukushima.

For the remainder of the discussion, I remained on the floor, as close to the audience as I could be.

November 26, 2013 UPDATE:  This article about my visit was published on the ASIJ website HERE.
Posted by Ian Thomas Ash at 2:12 am