‘A2-B-C’ is being screened four times over the two sessions of the Green Citizen's Action Alliance (GCAA)-sponsored events being held in Taipei in November and December (INFO), and while today was the second of those, no one was sure it was actually to happen.

On Thursday, two nights before I left for Taiwan while I was in Fukushima screening ‘A2-B-C’ for the first time (INFO), I received an e-mail from festival coordinator, Shr-Tzung Tsai, in which he said that I needed to sign the release forms and e-mail them to him that evening or the Taiwanese government may cancel the screenings of ‘A2-B-C’.  My heart sank; in all of my travels and being away from a printer/ scanner for so much of the last three months, I had completely forgotten to send the signed forms to the festival.

Realizing that I hadn't understood the importance of the documents, I quickly sent them with a profuse apology.  Shr-Tzung wrote back and said not to worry, that it wasn't my fault and that there was something else going on that he would explain when we saw each other in person.  Wondering if the festival was really going to be able to show it or if the authorities were going to prevent the screening of 'A2-B-C', I flew to Taiwan. 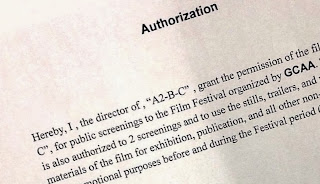 This afternoon, before the scheduled screening of ‘A2-B-C’ (INFO), I was invited to give an hour-long seminar about my work in Fukushima, which was attended by more than fifty young people.  I think it is important to mention how young the audience members of the film festival are: over the ten day festival, more than 20,000 people, mostly university students, are expected to attend the event.

In Japan, the faces of the anti-nuke movement are decidedly those who in Japanese are referred to as “aunties” and “uncles”, but here at the GCAA event in Taiwan, I was more often than not the oldest person in the room.

What GCAA lacks in financial resources, they have ten-fold in energetic, engaged young members, something of which I can imagine that many better-funded organizations would be jealous. 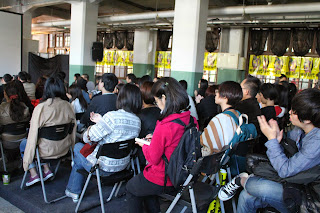 After the seminar, I was interviewed by UDN TV (PHOTO and VIDEO below).  During the interview, I caught out of the corner of my eye people beginning to line up in the hall outside of the venue.  When I asked what they were lining up for, I was shocked to hear that it was to see ‘A2-B-C’.

Having people interested enough in my work to actually come out of their home to see it is humbling in and of itself, but to have them line up to do so is something that left me in disbelief, and I wondered what the crowd would do if the authorities did, in fact, show up to stop the screening. 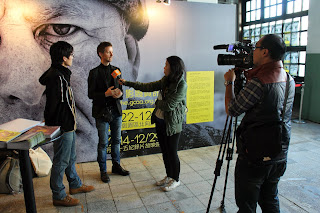 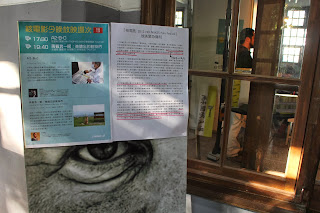 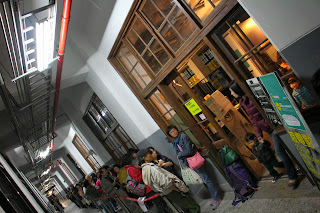 The venue was a wonderful space in which to hold the festival with its large areas for exhibitions and booths, but there was one problem for the organizers to overcome; if just a single screen was set up in the long, narrow room lined with columns, guests in the back would be seated so far away from the screen that they would have trouble reading the Chinese subtitles.  The solution was ingenious:  connect two projectors to a single computer in the middle of room that would project films onto two screens set up at either end of the space at the same time.  Even at a maximum capacity of 160 people, having the crowd split into two groups of 80 provided a comfortable (and legible) viewing experience for everyone.

After complimenting the festival curator for his ingenuity, I asked him how he came up with such a brilliant idea.  He humbly replied, “I don't know, I just wanted to make sure the guests could read the subtitles.”

Necessity is indeed the mother of invention.

I must also express my gratitude to the Taiwan Ethnographic Film Festival, which screened ‘A2-B-C’ in October (INFO) and generously worked with GCAA to grant permission for the Chinese-subtitled version of the film that they created to be screened during this festival. 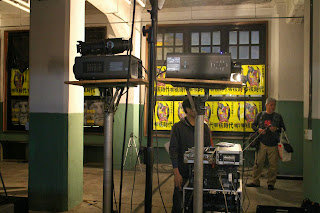 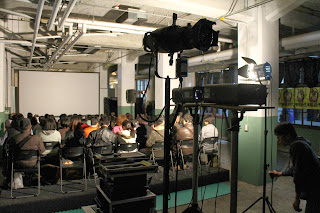 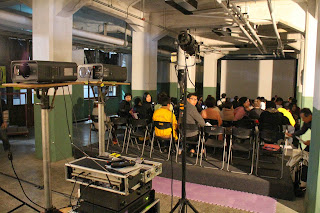 Having had the experience of screening one of my films at a festival where there were fewer audience members in attendance than theatre staff,  I cannot express enough how much of an honour it was to be present for a standing-room only crowd in a space with 180 seats!

GCAA Secretary General Shu-HsinTsui, explained to the audience that a complaint about their activities had been filed with the government by "a member of the public" and that as a result, an investigation into the festival had been launched, during which it was discovered that they didn't have on file my signed release forms.  She explained that while a law requiring the release forms is technically on the books, it is outdated and not followed by small film festivals nor has it been actively enforced... until now.  Secretary General Tsui stated that she felt the government was selectively enforcing the outdated law in an attempt to silence the anti-nuclear and inconvenient voice of the GCAA.

Unwilling to bow to even the hint of pressure from the government and although it was right in the middle of the festival, the Secretary General suddenly declared all film screenings to be free, thereby altering the event's classification and the paperwork that would be required filing.  In a demonstration of further protest, she said that the GCAA had issued a formal statement to the press on Saturday declaring their disobedience of the law and their refusal to submit the required documents, to great applause from the gathered youth.

For the record, the Taiwanese authorities did not swoop in to stop the screening of 'A2-B-C', and to be completely honest, I was slightly disappointed (insert wry smile *here*). 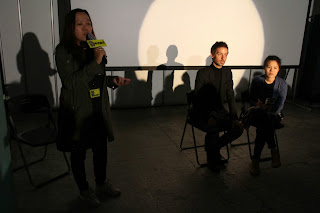 For the post-screening Q&A, the audience members watching the film from the screen at the back of the space were invited to join us at the front, and they all gathered around for a discussion both about what is happening in Fukushima and what the implications are for Taiwan’s nuclear future.  Both Japan and Taiwan share some geological similarities and both are prone to earthquakes.  But while the nuclear reactors in Fukushima are located 220km from Tokyo, nearly a third of the entire population of Taiwan lives within 80km of its nuclear power plants in Taipei. 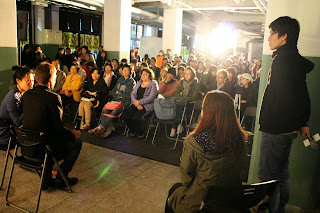 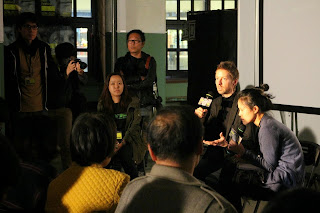 A young man asked me a question that came directly from the film itself.  After referencing the scene where I asked a group of young children in Fukushima how this was all going to end, he asked me, “how will this end?”

After a moment to think, I told the story of a man who saw the film in the Ukraine, the home of Chernobyl, when it was screened there a few weeks ago.  The man had come to me after the screening, his eyes in disbelief, shaking his head, and simply whispered, “Again?”

He could not understand how the world could have allowed another nuclear tragedy like this to happen.  Again.

“I do not know how all of this is going to end,” I told the audience in Taipei.  “But may the people of Fukushima never have to shake their heads and utter in disbelief the word ‘again?’ ".
Posted by Ian Thomas Ash at 11:30 pm