The more they take away, what remains only grows stronger

Today, I had the honour of being invited to take part in a traditional New Year's "Mochi-Tsuki" event (rice cake-making) led by Kaoru Konta, GP, from Inawashiro City, Fukushima.  Dr. Konta has held the New Year's event for the past two years for nuclear evacuees from Namie, a town located near the damaged nuclear power plant in Fukushima, who are living in temporary housing units in the neighbouring city of Nihonmatsu, Fukushima. 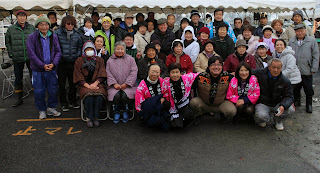 The citizens of Namie have not only lost their homes, but their families have been torn apart; much of the younger generation with small children have evacuated further away and many of the elderly have remained behind in temporary housing located in areas of relatively lower radiation within Fukushima Prefecture.  Along with the loss of their homes, a place where extended families would typically gather during the holidays, the evacuees also risk losing something equally important but less tangible: with fewer young people to carry on their traditions, the evacuees risk losing their long-held customs such as the "Mochi-Tsuki" event which is accompanied by folk songs sung in their local dialects.

The preserving of local cultural among nuclear evacuees is one of the issues that Anna Korolevska, the scientific director of the Chernobyl museum in the Ukraine, talked with me about when I was there last month.


Furthering the nuclear evacuees' frustration, the units in which they have been placed were built to last just two years (the amount of time that the government originally stated it would take until the citizens could return to their homes) despite many experts' opinions that it would take decades for the contaminated areas to become inhabitable again.  After nearly three years, many of the units are literally falling apart, cold air coming in through cracks in the walls and from under the floorboards (as described in THIS Japan Times article), and we witnessed this first-hand when we were invited into the unit used for the community centre.

With even these immediate needs seemingly out of the authorities' control, many of the residents appear to have little hope that issues such as a long-term housing solution and jobs for those who have lost their land and livelihood, will be solved any time soon.  As a result, Dr. Konta and her colleagues have noticed a sharp increase in depression, alcohol abuse and domestic violence among the nuclear evacuees. 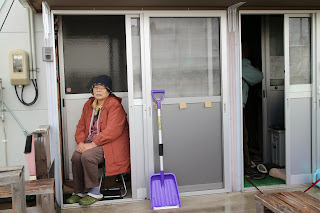 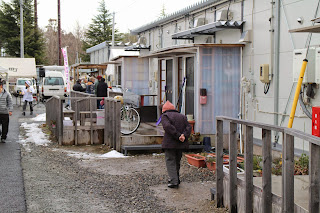 Several weeks ago, Dr. Konta held her annual health symposium which she established several years ago to help educate the people of her town about issues affecting their health.  I had the honour of attending the symposium earlier this month, and the theme this year was about the health affects of radiation.  Featuring two guest speakers, one of whom has extensive experience working with children affected by the nuclear fallout from Chernobyl and the other a medical doctor, the event was intended to provide the citizens of Inawashiro with points of view that they may not have heard before so that they could make more well-informed decisions about issues affecting their families' health.

In the car on the way back from the "Mochi-Tsuki" event this afternoon, Dr. Konta and her husband shared with me something shocking about the health symposium: soon after it was held, a complaint of "inciting panic" was filed against Dr. Konta with the city hall, and she was visited by three high-ranking city officials who accused her of using city property (the auditorium where the event was held) for anti-nuclear purposes, and they demanded an explanation.

Dr. Konta was being accused of "inciting panic" through a medically-sponsored symposium on health (!).  I asked her if she sensed any pressure, hidden or otherwise, had been placed on her as a result of this charge.  She nodded.  Dr. Konta had received a phone call yesterday, the day before the "Mochi-Tsuki" event, from the mayor of Inawashiro City.  Without providing any reason, the mayor informed Dr. Konta that he was no longer able to donate any rice for the event, something he had done for the previous two years and as he had promised to do again this year.

The mayor's donation represented only a portion of the needed rice, and the reneging of his promise didn't cause any real damage; but that wasn't the point: Dr. Konta was in shock as it appeared as though the mayor was trying to put pressure on her by taking away rice from nuclear evacuees.

Dr. Konta's husband, a heart surgeon, had an even more sinister take on it. "Rice cakes are just the beginning." 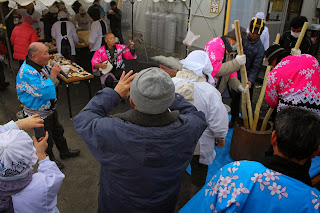 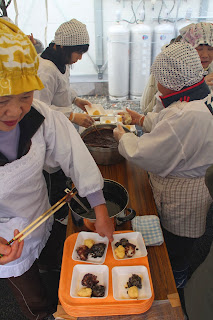 As the volunteers from the City of Inawashiro passed out the "mochi" rice-cakes to the people of Namie who were now living in temporary housing, the intended recipients kept insisting that the volunteers sit down and join them in the meal.  These people who had lost nearly everything wanted to share what little they were being given; they didn't want to be served, they wanted to break bread together.

The government officials may be able to take away rice, but what remains, the human spirit, is beyond their grasp.  The more they take away, what remains only grows stronger. 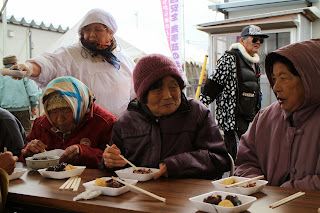 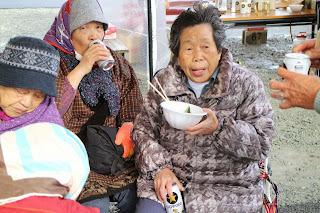 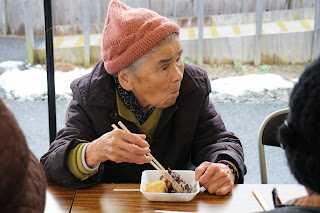 I feel uncomfortable celebrating my birthday.  When I try to avoid birthday cakes or showy displays of birthday celebration, people tease me that I just don't like the idea of getting older.  Although I know this isn't the reason, I hadn't really understood myself why I avoided celebrating my birthday, and so I could never fully explain it to anyone else... until today, my 38th birthday.

Today, I spent the day exactly how I had always wanted to: doing something that wasn't about me in a place where no one knew it was my birthday.

As I put my thoughts about today into the words I wrote above, it clarified for me my feelings about birthdays: we have been put on this earth to do for others, and we are called to celebrate the gift of life that we have been given not by celebrating our own birth and receiving physical 'presents', but by celebrating that mystical exchange of grace that occurs when we use our 'presence', the life that we have been given, to do for others.

May your 2014 be filled with many Blessings, much Peace and good Health,
Ian
Posted by Ian Thomas Ash at 11:30 pm