The Epicenter of Existence

Yesterday's screening of 'A2-B-C' (INFO) took place in the Kobe Art Village Center (WEBSITE).  This part of Kobe was badly damaged in the 1995 Great Hanshin Earthquake (INFO) and it was here that the city of Kobe envisioned creating a center for the arts when the area was rebuilt.  Yesterday, not far from the epicenter of one recent natural disaster, a film about another recent disaster, this one man-made, was viewed by members of an audience some of whom had survived the 1995 disaster and some who had evacuated from the areas contaminated by radiation nearly three years ago. 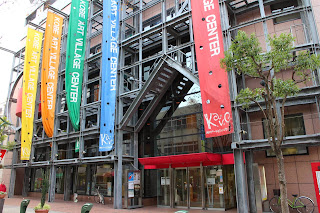 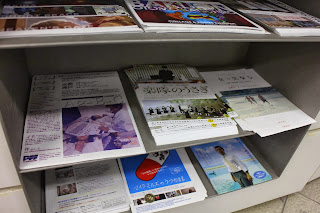 Following recent screenings of 'A2-B-C', the call for showing the film more widely has become increasingly louder, and while I am grateful for this, I struggle with how to explain to people all of the issues-- and resistance-- that affect how and when the film can be released.  Meanwhile with all of the interest and seeming potential for an audience for the film in Japan, I must admit to being baffled at the difficultly we have experienced in getting a domestic theatrical release secured before now.

Following the screening and Q&A, I was interviewed by Satoshi Akazawa of Radio Kansai (WEBSITE), who also interviewed me live on the air two nights ago (INFO).  Although a few local radio stations and independent blogs have picked up the story of 'A2-B-C', I suppose it shouldn't be a surprise that no major network or news organization have done the same. 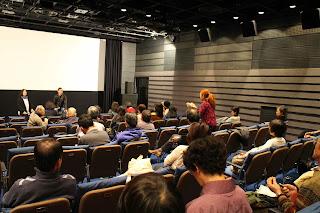 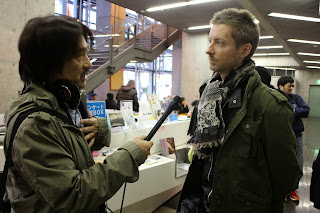 In the taxi on the way back to the station to catch a bullet train for Tokyo, I noticed a handwritten paper the driver had stuck to his dashboard.  These words to live by were in a place that both he, and those he guided safely to their various destinations in life, could see.

During this three-month journey that has been the World Tour of 'A2-B-C', thank you all so very much for your encouragement, support and guidance.  May we all be as the wise taxi driver and remember to both Joyfully Exist and to inspire others to do the same.

In Peace and with much Gratitude,
Ian
Posted by Ian Thomas Ash at 4:48 pm