I stayed for an extra day after the Hiroshima Peace Film Festival ended; I simply felt I couldn't come all the way to Hiroshima for the first time and not visit the place which holds all those terrible memories that we must never forget.

And also by coincidence, this month the group of activist artists known as 'Chim↑Pom' (WEBSITE) have been holding their anti-nuclear-themed "Hiroshima!!!!!" exhibit (Dec 8th - 17th, 2013 INFO) in the former building of Japan Bank Hiroshima Branch, so I decided to begin my tour of Hiroshima there. 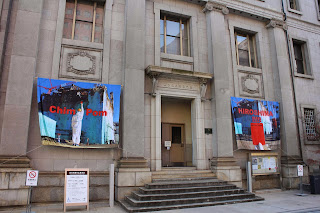 The exhibition contains many of Chim↑Pom's works and video art that have become famous (or infamous?) commentaries on the Japanese governments' post-Fukushima policies.  Chim↑Pom is continuously pushing the boundaries of freedom of speech making themselves the ire of the government, and their "pop-up art" (installing works of art in public places without the permission of the authorities) has landed them in trouble more than once.

The former building of Japan Bank Hiroshima Branch itself was badly damaged by the nuclear blast, and seeing this exhibit in this space was a once in a lifetime opportunity. 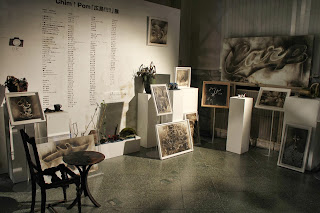 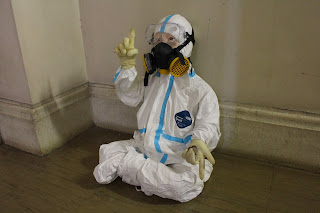 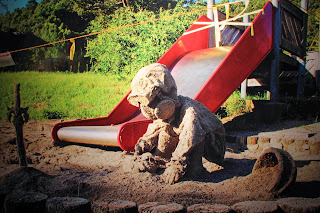 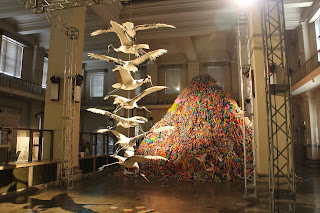 After visiting this amazing exhibit I needed to sit down for a few minutes and try to at least begin to process what I had seen before moving on to what I knew would be an even more over-whelming experience: the Hiroshima Peace Memorial Museum (WEBSITE).

Beginning at the Peace Dome, I spent the rest of the day in the Peace Memorial Park (INFO), the large area that has been set aside to memorialize, commemorate and teach about what happened on August 6, 1945 at 8:15 in the morning. 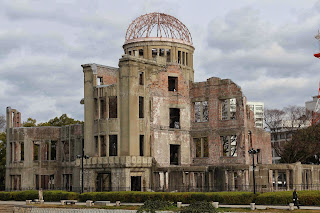 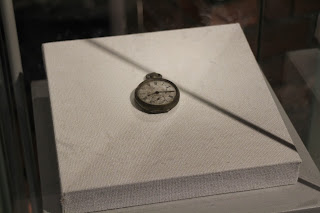 What it is like to be here is something that is not easily put into words, and so I will limit my description of the museum itself to two exhibits which particularly struck me.  The first is one which has recently stirred a controversial debate: it depicts a scene just after the atomic blast and contains several mannequins with their skin melting off their bones.

It unfortunately appears that the City of Hiroshima may end up bowing to pressure to remove the mannequins thus sterilizing the truth, lest, God forbid, anyone feels uncomfortable at an exhibit depicting the dropping of an atomic bomb onto a city full of people. 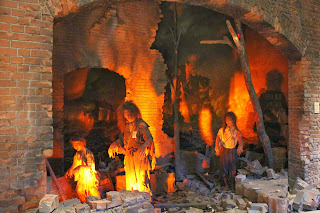 Also in the museum is a short video about the "Effects of Radiation on Human Bodies".  As I watched it, I was reminded of "X Years Later", a documentary about the Japanese fisherman who were exposed to radiation from US nuclear testing (which I wrote about HERE), and their story suddenly became inextricably intertwined with that of Hiroshima and Fukushima.

Radiation effects do not necessarily appear immediately after exposure.  They can manifest years later.

Therefore, even now A-bomb survivors live with profound anxiety about their health. 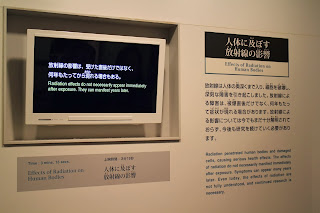 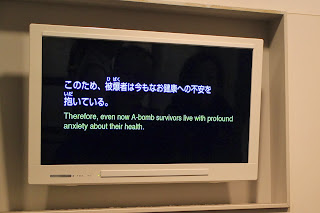 And then I came across this plaque in the National Peace Memorial Hall for the Atomic Bomb Victims that I could not help but to read as a warning:

The injuries inflicted by the atomic bomb appeared to be healing by the end of 1945, but a high percentage of those who seemed to be recovering later fell victim to a vast array of aftereffects...

[...] The pain and anxiety of many survivors continue. 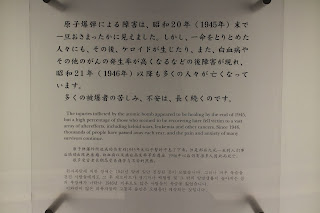 And all of this we have done unto ourselves.
Posted by Ian Thomas Ash at 10:00 am